in Wish list
Total Products
View my Wishlist
You have no items in your wish list.
Cart 0
Product added to cart
Menu
Account
Settings
THERAPEUTIC SUPPORT BOOT AIR Front Next 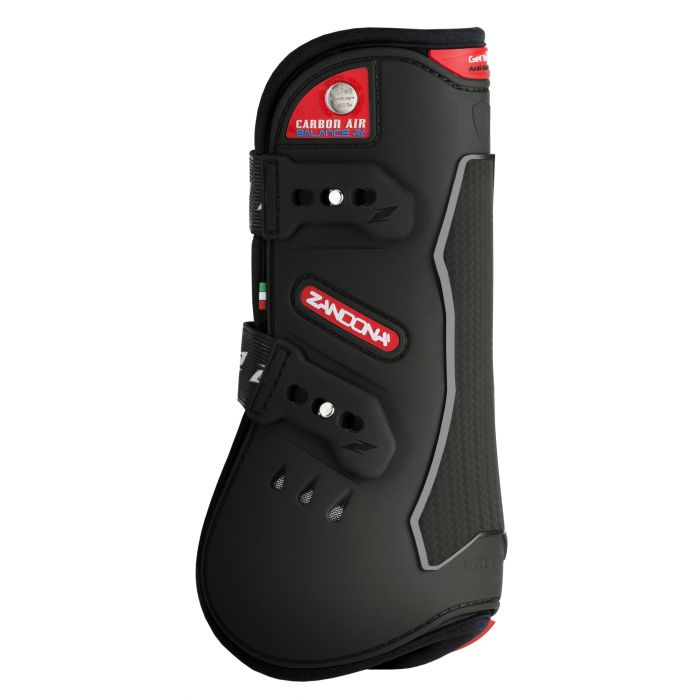 Skip to the beginning of the images gallery
Details
The 100% made in Italy "CARBON AIR BALANCE Tendon" have been studied to defend jumping horses from collisions and bruises at forelimb's fetlock and part of the cannon, while offering tendon support. They are composed by external TPU structure with differentiated thickness, transpiring thanks to the perforated Neoprene and ventilated by 6 Air-Vents located over the fetlock. Gel-Tech is included between the external TPU structure and the Neoprene support, where necessary, working as shock absorber and comfortable padding. Carbon Fibre elements are present under the shell to thermally insulate the joints from the heat generated by external friction, while increasing the mechanical resistance to impacts. On the internal side, closed to the long-pastern, have been created a Flex-Zone, necessary to allow maximum freedom of movement to the limb. The elastic straps with quick-release-tip have been calibrated for a secure closing, they are in-fact provided of double locking system (horizontal\vertical). Its dimension and absolute ergonomic shape have been developed copying accurately the limb structure, guaranteeing a perfect positioning while avoiding any kind of stress. They are also equipped with a magnetic device that improve cellular function, increasing horses performance and dynamic balance. The permanent magnet used is composed of a highly magnetic alloy of Neodymium, Iron and Boron with Nickel coating, capable of exerting a magnetic flux density of 2600 Gauss. It was found in various tests with the help of veterinarians and professional riders, that the use of this device placed near the muscle-tendon apparatus greatly decrease the limbs fatigue as induce an increase in vascular blood-flow and lymphatic-circulation, with multiple beneficial effects. The benefits induced by increased vascular blood-flow and by the magnetic polarization, ascertainable on horses as humans, are anti-inflammatory and analgesic effects, bones and joint articulations strengthening, as well as acceleration of the process of toxins expulsion and of absorption of muscles lactic-acid. Those benefits lead the improvement of movements and jumping performance of the horse.
More Information
Reviews 4
Write Your Own Review
Product Questions
Customer Questions
No Questions
Please, mind that only logged in users can submit questions
Related Products