in Wish list
Total Products
View my Wishlist
You have no items in your wish list.
Cart 0
Product added to cart
Menu
Account
Settings
SOFT ACTIVE VEST PRO Equitation Next 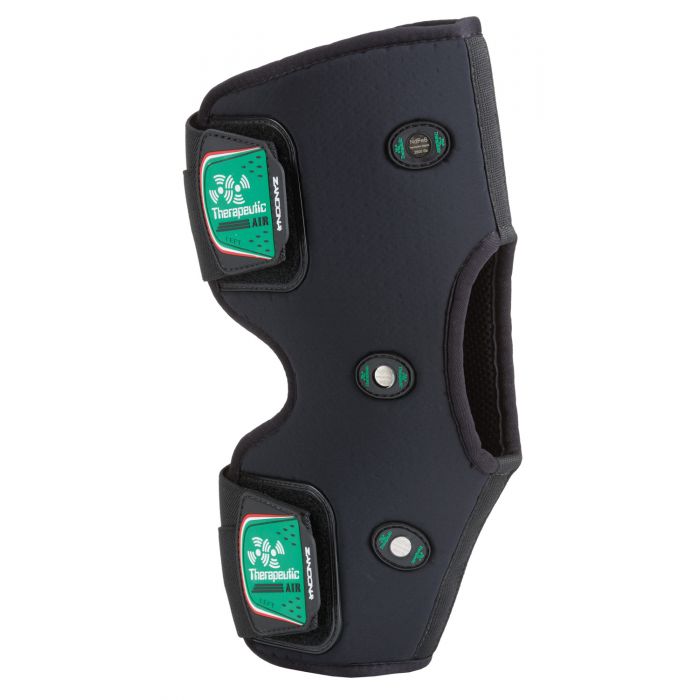 Skip to the beginning of the images gallery
Details
The rest bandages "THERAPEUTIC AIR HOCK" are equipped with 10 magnetic devices that improve cellular function, providing a natural therapeutic support to the hock and by reflexology to the whole body.


The permanent magnets used are composed of a highly magnetic alloy of Neodymium, Iron and Boron with Nickel coating, capable of exerting a magnetic flux density of 2600 Gauss each.


The specific arrangement of magnets, their flux density, intensity and polarization, have been studied with the help of veterinarians and professional riders to maximize the localized increase in vascular blood-flow and lymphatic circulation, with multiple beneficial effects:


Using reflexology principles, that is magnetically stimulating the reflex points (Ting) placed on specific meridians of the horse (the same points used for acupuncture), some moderate rebalancing effects are obtained:


Unlike anti-inflammatory pharmaceutics, which create vasoconstrictor action (thus slowing the vascular blood-circulation and lymphatic circulation, resulting in a slowdown of cellular processes), magnetic therapy acts on pain and swelling while avoiding the side effects of the pharmaceutics, while instead enhancing regenerative processes.

 Increase of micro-circulation in cartilages;

 Accustom the horse with gradual usage sessions, as it may initially feel a sense of tickling due to the increased blood-flow localized. For the first few uses, it is therefore recommended to monitor the horse to prevent him from injuring the magnetic devices.

 Can be used on horses of all ages and gender, if necessary permanently when at rest.

 Wear only at rest, when the horse is cold, to avoid possible nuisance that might irritate its behavior.

 In presence of injuries, do not use in the acute phase (first 5 days)!

 Do not use in the presence of visible bruising, open wounds, bleeding, injury or not treated infections because the magnetic effect could contribute to expand the area affected by these diseases!

 Do not use in combination with anti-inflammatory pharmaceutics, blood thinners or ointments active in the areas affected by the magnetic treatment!

 Do not use in presence of pacemaker!

 Do not use during pregnancy!

 This is not a medical device!
More Information
Reviews 1
Write Your Own Review
Product Questions
Customer Questions
No Questions
Please, mind that only logged in users can submit questions
Related Products

THERAPEUTIC SUPPORT BOOT AIR Front
As low as $339.90
Rating:
100%
4 Reviews
We found other products you might like!